For many months I hesitated to enter the Pantheon – I didn’t know what is exactly there and if it’s worth spending 9€.  Finally, after I decided to visit this monument, I got very surprised by the architecture and art you can see inside.

Le Panthéon is a great masterpiece located just next to the University of Sorbonne, in front of famous Jardin de Luxembourg and not far from Notre Dame. However, the location is both bad and good for this mausoleum. I am sure that most of the tourists have seen it from outside, being in the center of many other tourist places gives the assurance not to miss it. Sadly, frequently people choose not to enter the old church and to enjoy other more famous places instead.

In 1774 King Louis XV, in the face of a deadly disease, asked for a recovery to Saint Genevieve, the main patron of Paris. When he recovered, he decided to build a temple dedicated to this saint. The building served as a church during many years but since 1885 the temple was desacralized and all Christian symbols have been removed. Since that time it has become a mausoleum of a famous French people.

“The Pantheon is laid out like a Greek Cross: the nave, chancel and two transepts are more or less equal in size. It is an early example of neoclassicism, with a façade modelled on the Pantheon in Rome.”

The monument has one floor with statues and a basement where the crypts are located. The Pantheon’s major sculpture, La Convention Nationale, stands in a place where it used to be an altar. It features Marianne, the symbol of France, with soldiers on her right and members of the National Convention on her left. It was this National Convention who ordered the executions of Louis XVI and his wife Marie Antoinette in 1793.

In each corner you find more sculptures, below you can see a tribute to the orators and politicians called Statesmen and Generals. It is very impressive and detailed.

However, what brings the most attention in the Pantheon, is Foucault Pendulum, a simple device named after French physicist Léon Foucault, which conceived as an experiment to demonstrate the Earth’s rotation.

“At either the North Pole or South Pole, the plane of oscillation of a pendulum remains fixed relative to the distant masses of the universewhile Earth rotates underneath it, taking one sidereal day to complete a rotation. So, relative to Earth, the plane of oscillation of a pendulum at the North Pole undergoes a full clockwise rotation during one day; a pendulum at the South Pole rotates counterclockwise.”

At the latitude of Paris a full precession cycle takes just under 32 hours, so after one sidereal day, the oscillation plane has turned by just over 270 degrees.

Inside you can also see a model of Pantheon that looks exactly like the original one, just smaller version.

In the crypts of Pantheon in Paris, there are buried, famous French people. Among 76 men there are Voltaire, Rousseau, Victor Hugo, Émile Zola, Jean-Jacques Rousseau, Alexandre Dumas and 5 women. For many years there was only one woman in the Pantheon, the double Noble prize winner, Marie Skłodowska- Curie. 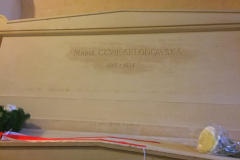 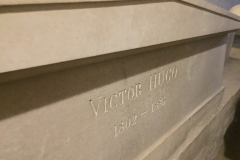 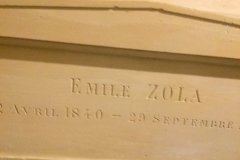 If you are also hesitating to visit this mausoleum remember that this unique place with splendid architecture, a device showing that the Earth revolves around its own axis and crypts of influential people deserve your attention.

To find out more information check out the official website of the Pantheon.

Tuileries Garden – beautiful gardens next to the Louvre